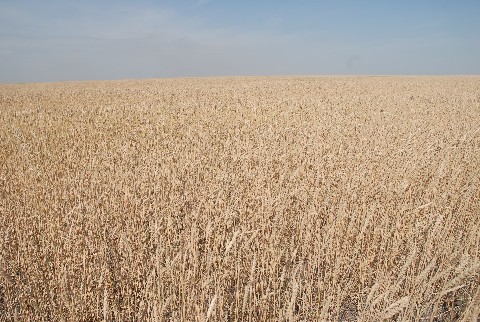 The latest weekly report from Manitoba Agriculture, Food and Rural Initiatives says warm weather has helped advance crops but development is variable across the province. This applies to both crops and forage, with hay and pasture conditions varied because of early wet weather and delayed cutting, reported “Kazakh-Zerno” IA with reference to the “Grain News“.
In the southwest, winter wheat and early cereals are starting to turn, with the earliest harvest likely in two to three weeks. Fusarium is also showing up, and leaf disease is high in both wheat and barley is high.
The northwest reports that most cereals were fully headed and early-seeded fields were at various dough stages, with most canola at the podding stage with approximately 30 per cent exhibiting immature seed development. Cereal leaf diseases were also evident. Excess moisture and flooded fields were drying up slowly with spray outs and some tillage continuing.

After extended wet weather, operations are resuming in the central region. Early harvested winter wheat is yielding 70 to 85 bushels per acre, with fusarium levels fluctuating from 0.5 to 3 per cent. The barley harvest should also begin soon in the region, and early-seeded canola fields may be swathed this week given that fields are maturing quickly in the heat.

In eastern Manitoba, heat accumulation was approximately 60 per cent of normal during the week with soem development of warm-season crops, buts soil moisture is rated as full across the region and there was as much as 33 mm of rainfall in some areas. Rainfall accumulations were extremely variable. Standing water and associated crop yellowing is reported in some areas. Crop development throughout the eastern region remains variable.

In the Interlake, warm conditions were beneficial to the warm season crops. Winter wheat is in the soft dough stage. Fusarium head blight is evident in many winter wheat fields. There are reports in the Teulon/Petersfield area of empty seed heads and affected kernels. Haying progress has been slow due to scattered showers.

World Agricultural News
USA:With warm and wet summer, Minnesota crops are flourishing
0
You may also like