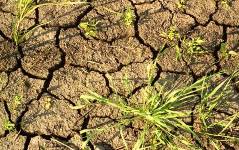 A drought across Europe and Russia has pushed wheat prices to 13-month highs, reported NA “Kazakh-Zerno” with reference to the “The Wall Street Journal“.

The realization that most harvests around the world are likely to be lower than initially expected has caught some traders off guard, throwing fuel on a rally that has seen futures prices rise almost 30% since late June.

Soft red winter wheat for September delivery on Friday ended at $5.8725 a bushel on the Chicago Board of Trade, down 2.5% on the day but up 8.3% on the week. Wheat futures last week touched $5.985 in intraday trading, the highest since June 11, 2009.
Many of the world’s wheat exporters, aside from the U.S., are experiencing problems with their crops.

Strategie Grains, a Paris consultancy, cut its forecast for wheat production out of the European Union, the world’s No. 2 by volume of wheat exported behind the U.S., by 2.8%, to 129.8 million tons.

“The weather panic is coming from all sides of the market in Europe,” said Alex Bos, an analyst with Macquarie Bank in London.

Russia said it may revise lower its production estimate of 85 million tons due to drought conditions. Wheat output from Russia, which in recent years has become an important exporter, may drop to as low as 56 million tons in 2010-11, according to the latest estimate from F.O. Licht, a commodities consultancy.

Analysts said Russia even may cease or curtail shipments abroad. Meanwhile, other countries included in the group of the top-five wheat exporters also are facing problems. Canada’s crop has struggled due to excessive rains, and Australia is battling a plague of locusts.
While the recent run-up in prices raises the specter of 2007 and 2008, when wheat futures prices hit all-time highs above $13 a bushel, the nature of this rally is different. That increase in prices was driven by demand growth that caused spot shortages and provoked a global outcry against rising food costs.

This time, demand has stayed relatively weak as the supply outlook deteriorates. As recently as June 9, Chicago wheat futures were plumbing two-year lows.

Macquarie expects Europe’s total wheat crop to come in on par with last season, and with stockpiles at comfortable levels, “we don’t think there will be any dire shortage of wheat,” Mr. Bos said.

In the U.S., this year’s forecasted harvest, seen as average, is expected to swell inventories to their highest level in 23 years by next spring. This could boost the U.S. share of the global wheat trade to 25% from 18% if inventories in Europe and Russia are whittled down, Mr. Bos said.

Many speculative investors had bet that prices for the grain would continue to fall, according to data from the U.S. Commodity Futures Trading Commission. As the global production estimates were cut, those investors were forced to buy back previously sold positions, forcing prices higher.

Traders warn that rallies such as this one, which feeds off bullish supply headlines, may be short-lived and prices could turn again with changes in weather.

Agricultural News of Kazakhstan
Kazakhstan: Kostanay farmers are worried not about the price of grain
October is outside, and the main concern of the farmers
0 1