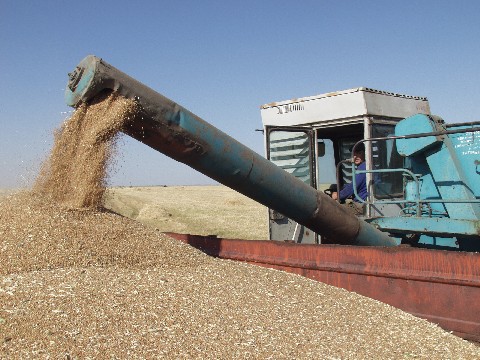 Just today, the Minister of Agriculture of Kazakhstan Asylzhan Mamytbekov announced the final figure of the 2012-13 marketing season. According to the head of the agricultural department, Kazakhstan over the past 12 months has shipped 7.1 million tons of grain. This figure will certainly be analyzed, our research department will present it in the next releases. Today, the following can be said: the country did not use a successful price environment of the past MY to the full extent. With a relatively low yield in 2012, but with decent carryover stocks, Kazakhstan reduced the export of grain by 42% compared with 2011-12 MY.

Holding company, on the need for creation of which insisted the head of the state, formally took place. Still, there are some ambiguities in this issue, and there will be a lot of organizational work ahead, but the format of the Holding has already been laid. The structure, designed to be a major player in the domestic and international grain market is beginning to take shape. For example, after much discussion, it was decided that United Grain Holding will be managed by public council of 11 members, 5 of them – representatives of the Farmers Union of Kazakhstan.

In the second half of June in the AIC of Kazakhstan, at last, took place the event that was spoken about for several years. On Friday, June 21, was signed a contract governing the creation of the United Grain Holding in Kazakhstan. The agreement was signed between Farmers Union of Kazakhstan and Food Contract Corporation, which is a part of the holding “Kazagro.”

Holding company, on the need for creation of which insisted the head of the state, formally took place. Still, there are some ambiguities in this issue, and there will be a lot of organizational work ahead, but the format of the Holding has already been laid. The structure, designed to be a major player in the domestic and international grain market is beginning to take shape. For example, after much discussion, it was decided that United Grain Holding will be managed by public council of 11 members, 5 of them – representatives of the Farmers Union of Kazakhstan.

From the outset, the initiators of the Holding want to bring in democratic principles into the management structure. According to the Head SFC Auezkhan Darinov, representatives of the Union to participate in the management of grain holding were elected democratically – at regional meetings.

It is assumed that the farmers themselves will be able to take part in pricing. And holding should play in the market in order to cover the administrative costs and to get profit. According to the results of grain sales, profits will be divided among the members-participants of the agreement of the United Grain Holding. Meanwhile we are working on the compilation of this text, which is actively discussed.

“A lot of other problems and issues are raised, and I’m sure even more will come up. The main thing is that the process has started and we, the public, ordinary peasants are taking active part”, said the head of the Union Auezkhan Darinov.

And while holding is being created, the events in the grain market of the country are going on as usual.

“In the second half of June the price of wheat, barley and flour in the domestic market of Kazakhstan fell even further under the influence of some internal and external factors.

In the world markets during the same period the price of wheat and corn fell to their lowest level in 2012-13 MY that had an impact on the domestic market of Kazakhstan.

Global consumers are waiting for the new crop with lower prices, delaying purchases at a later date, thereby reducing overall demand. Meanwhile, the new grain in Kazakhstan will not appear soon and hopes for a bountiful harvest are not so rosy, like a month ago.

The climate conditions of plant growth in June were less favorable than we would like. A good basis for the crops in the form of high moisture content in the soil before planting nullified too dry June with a minimum level of rainfall. Because of this increased interest rates on yield are not quite justified. In Kazakhstan the rain poured down as if through a sieve into a large cage – somewhere it was, in other places there was no precipitation at all. Again, the long-suffering West suffered the most of all. Moreover, the region suffers from locusts which affected large areas of the Orenburg region of Russia, Bashkiria and north-west of Kazakhstan.

Grain growers in Aktobe region can hardly blunt the attack of pest. Such an invasion of voracious insects farmers see for the first time in 30 years. Particularly were affected crop farms, which are located along the border of the adjacent territory of Orenburg, from which there is mass migration of locusts. 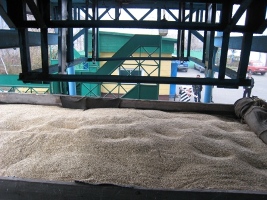 Locusts do not spared Kostanay region too. More than 850 thousand hectares are already cultivated there and more than 70 percent of the pests are destroyed. But the situation is aggravated by the lack of rainfall across the region, as well as the high temperatures that can literally burn the crops and dry land.

So, the first month of summer has not added joy for the peasants. There is no rain, and weather forecasts are not very inspiring. Rosy forecasts of June, including of the USDA experts who predict to Kazakhstan production of cereals at 15 million tons, are melting right in front of your eyes. Local independent experts and practitioners of the grain business taking into account the latest reports of agricultural meteorologists and the current state of the crops barely give 10 million for the 2013 harvest. According to them, the results of the season will vary considerably in different farms.

In a better position will be the ones who managed to sow at an opportune time in May. In these farms plants have time to get stronger with the help of spring moisture and are more ready for the summer hardships related to the lack of rainfall. Those who held late sowing will be in a worse position. Their crops can die, and in the best case – to give poor harvest of grain. But let’s hope for the best and for the fact that precipitation that came to the rescue will fix things.

According to statistical information of CTC, in May Kazakhstan shipped 138.9 thousand tons wheat or rye flour, which corresponds to April volumes of 138.8 thousand tons. It was shipped 264.1 thousand tons of wheat and meslin, totaling 65,483 thousand dollars, which is two million higher than the April figures. For comparison, in April shipments of wheat totaled 236.2 thousand tons.

In the structure of exports Kazakh exporters do not have added much in supplies to the CIS -190.8 thousand tons compared with 165.7 thousand tons in April. The rest of the world imported 73.2 70.4 thousand tons of grain, which almost corresponds to the April marks.

In January was handled 5.4 million tons of barley, which is almost 4,000 fewer than the previous month. More than two-thirds of the weight took Iran – 3.1 thousand, and one thousand tons went to Azerbaijan.

In May were exported more flour, as mentioned above, than in April. The main customers of Kazakh flour remain the CIS countries. They received about 80% of the total volume, or 113,716 tons.

At present, the export potential of Kazakhstan is estimated at 7-7.5 million tons by the Ministry of Agriculture of Kazakhstan. FAS USDA experts are predicting Kazakhstan 6.5 million tons of export shipments. But forecasts are subject to change in the early months of the season, when the situation will be clear with the volume and quality of the new crop, as well as the volumes of grain balance sheets for countries competitors in export.

In any case, even if the grain harvest in Kazakhstan will be below the expected level, the country can count on sufficient carryover stocks of grain from last season. As it was previously reported, according to the Statistics Agency of Kazakhstan, as of May 1, grain stocks in Kazakhstan amounted to 9,255,850 tons. On June 1, there was 6,893,321 tons of grain in Kazakhstan. Data on stocks of grain, on July 1, will appear soon and will give a clearer picture of the grain balance in the country. For more information on the ETS trading sessions, see the analytical application “The dynamics of sales and prices at the ETS of wheat of 3 class”.