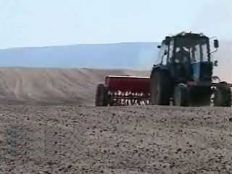 “In the areas of cultivation of winter crops in the south and south-east of Kazakhstan in the third decade of October was marked moderately warm weather, without rain but with frost at night to minus 4 degrees, in the mountains and foothills to minus 10 degrees. These weather conditions were favorable for the preparation of the fields and finishing sowing of winter crops”, “Kazhydromet” said in the agrometeorological review.

On an area observed winter wheat condition was excellent and good, except the crops in the area of MS Kyrgyzsay in Almaty region, where it is assessed as satisfactory. In the area of MS Aksenger in Almaty region farmers spend harrowing of winter wheat. In the southern regions continued the harvest of corn for grain, in the east of sunflower. In the gardens the state of fruit crop was rated good or satisfactory.

As noted by meteorologists, lowering temperatures and freezing on the surface of the soil slowed the growth of sown grass. Throughout the South-Kazakhstan region was noticed damage of alfalfa by livestock, IA “Kazakh-Zerno” reported.