Kazakhstan: Akmola farmers has not enough subsidies for seeds 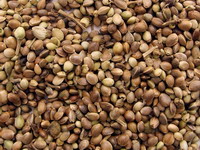 As previously wrote Agency the IA “Kazakh-Zerno”, in 2013 Akmola farmers were allocated 350 million tenge from the state budget for the purchase of seeds. In addition, applications were made for allocation from the local budget additional 400 million tenge.

“Now farmers taken seed loans, and call from areas to tell they do not have seeds. We have already filed a second request to the akimat for provision of funds for the purchase of seeds of 1,2 and 3 reproductions. I think they will give us them”, said in the regional department of agriculture.

The region covers the demand on seeds. But not all farms have prepared the necessary volumes of seeds. With demand of 518.9 thousand tons of seeds, there are 526 thousand tons of seeds in the region. However, in some households, which lands have not been spared by the passed drought, the lack of seed is strongly felt.