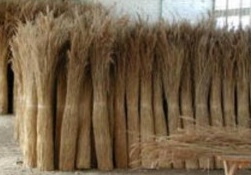 In Akmola region hay-harvesting campaign is in full swing. According to forecasts, the current grass stand of perennial herbs and natural grasslands will allow preparing a stock of hay which is enough for eighteen months, said the press center of the akim of the region.

Esil district is in a group of progressive regions in the haymaking in the Akmola region. Mown area of cultural and natural grasslands in the district is of 35 thousand hectares, said the special correspondent of the IA “Kazakh-Zerno”.

To date, the district agricultural producers harvested more than 12 thousand tons of hay. Annual leader in haylage provision is LLC «Zarechny”. Elite-seed farm for the production of seeds of perennial grasses and legumes grasses sells seeds to agricultural companies throughout the area.

Particular attention in the household is paid to fodder production. This year was planted 720 hectares of perennial grasses, 570 hectares annual. Thanks to the modern high-producing harvesting equipment the company achieves a high yield.

Agricultural News of Kazakhstan
Kazakhstan: In Kyzylorda region prices for foodstuffs increased by 1.6%
0