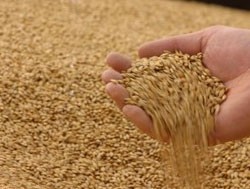 The harvesting campaign of winter crops and spring barley continues in the region, the average yield of which has increased since the last week to a few tenths of a quintal, wrote the correspondent of the IA “Kazakh-Zerno”. To date grain yield is fixed at 16.5 q / ha.

According to operational reports of the regional department of agriculture, growers harvested 271.5 thousand tons of new grain. Harvest plan in the region is completed by 73%, and field works covered about 164.5 thousand hectares.

We recall that the total average yield in the last dry year fixed at 8 q / ha. As a result, winter wheat and spring crops in the past year have put in the regional reserves about 201 thousand tons.

Growers planned to cover with winter wheat last spring about 115 thousand 370 hectares. But due to unfavorable weather conditions the result of sowing campaign reached only 112 thousand 434 hectares.