Kazakhstan: Karaganda citizens will be offered potatoes at 30 tenge 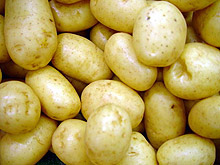 Karaganda is preparing for the first in this year autumn fair of agricultural products. It will be held October 12, at the Olympic street, said the correspondent of the IA “Kazakh- Zerno”.

There will be vending tents, with parking, and access of public transport. The program of the fair includes not only the sale of products from rural areas and large processing enterprises, but also entertainment – bauyrsak show, kumys and pilaf festival.

Already made decisions on the prices of products are already made. Thus, the price of a kilo of potatoes is 30 tenge; the beef will go for 950 tenge, horse meat for 1100, pork for 700.

– Prices for a number of goods will be lower than on the recent fair in Astana, said the deputy akim of Karaganda region Kairat Aituganov. – We will look at the volume of offered products, analyze everything, and second – third fairs will be made with adjustments.

Meanwhile, last weekend was held a fair in Aktogaisky district. People’s interest in it has exceeded all expectations; the goods were sold out in two hours. In addition to meat and vegetables, has been sold 10 tons of flour, 5 tons of bran, 3 tons of confectionery products, etc. Also an important result was positive emotions received by the residents of the district from the festival.

Agricultural News of Kazakhstan
Kazakhstan ends WTO accession talks with Saudi Arabia
Before the end of this year, Kazakhstan is expected
0 3