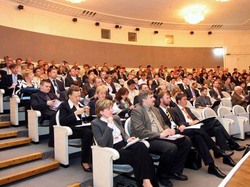 Only qualified agrarians should manage the development of agriculture and the implementation of industrial government programs. This fundamental position of the akimat of Karaganda region resulted in large scale job on teaching agricultural officials of different levels, the correspondent of IA “Kazakh-Zerno”.

– We started education at the end of last year – said the deputy akim of Karaganda region Kairat Aituganov. – We organized short-term courses for deputy akims of different districts, heads of departments of agriculture and akims of the rural districts on “Implementation of the state policy in the AIC”.

At present, training is already producing results – in rural districts enhanced the work on the implementation of government programs to raise public awareness.

This year, the regional akimat decided to organize training of villagers as well. On the basis of the center knowledge distribution in the field of agriculture the JSC “KazAgroInnovation” as a part of the budget program “Information support of agricultural subjects at no cost” will be trained 700 farmers from the region. The first group started classes on June 17.

Of the 187 akims of aul and rural districts about 41% have agricultural education. This year, another 72 akims expressed a desire to get a second higher education in Kazakh Agro Technical University named after S. Seifullin in order to perform their duties more efficiently.

Agricultural News of Kazakhstan
In West Kazakhstan over the past year eggs rose in price by almost 28 %, pasta – 6%
0