Kazakhstan: Mass harvest in the Akmola region has not yet started 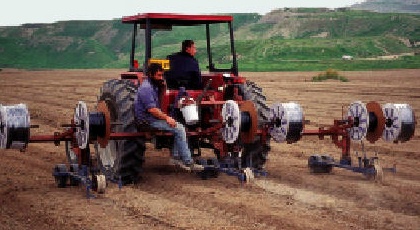 Grain crops in the forest areas of the region are not ready for harvest season. “Now there is a drop-off of wheat, and mainly in the steppe zones, pick up a little. About mass cleaning still there is no talks at all “, the correspondent of the IA “Kazakh-Zerno” was informed in the provincial department of agriculture.

In the department assured that harvest of the new grain began three days ago, so it is too early to speak about the first indicators of harvest. “Still the yield is not clear, we focus on species. The task on a gross output of 5 million tons of grain still has all the possibilities to come true. Weather permits this”, explained in management.

According to the summary of the Ministry of Agriculture, the region has already cleaned 200.1 thousand hectares of land with grain crops from which was harvested 191.3 tons. Also, according to these data, the average crop yield is 9.6 q / ha.

We recall that in the same period last year, the harvest figures were much higher. Gross yield has already exceeded 1 million 361 thousand tons, but grain yield was at around 6.2 q / ha.

Agricultural News of Kazakhstan
Why did the scapegoat be put in the chair of the Minister of Agriculture?
How many ministers of agriculture were in Kazakhstan!
0 2

Agricultural News of Kazakhstan
In Astana was given the start of the major international agricultural exhibitions in Kazakhstan
At the moment in the capital, Astana, at the exhibition
0 1

Agricultural News of Kazakhstan
Kazakhstanian grain, which is sent for export, grew in price by 3.8% – statistics
Export prices of goods in August fell by 2.
0 1
You may also like