Kazakhstan: Minister of Agriculture is the most inefficient state manager 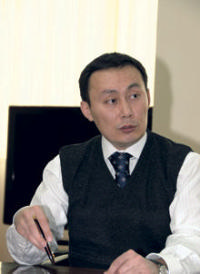 Minister of Agriculture Asylzhan Mamytbekov took the penultimate place among executives in the country,  referring to the research  of the Center for Social and Political Studies “Strategy”.

In March ” Strategy ” conducted a survey among Kazakhstani experts, who are competent in matters of political issues. In total 30 people were interviewed by a specially developed questionnaire. The experts were asked to rate the representatives of authority  ( 43 people  – heads of key departments, ministers, councilors and mayors of cities) on the following criteria: credibility, efficiency (as manager) and promising (as policy) to 7 – point scale (where 0 – no feature,  7 – the maximum rate feature).

As a result, the ranking was compiled as the arithmetic mean of  three indicators.  According to the results of rating representatives were divided into three main groups.

In the  group  of  “first-rate” there are  politicians who  have received more than 4 points in the final ranking (of 11). This group with the index 5.3 points was led by  the current head of  Committee on National Security – Nurtai Abykayev.

Also there are a mayor of Astana Imanagali Tasmagambetov, Prime Minister Karim Massimov, the head of the Administration of President Aslan Musin and Chairman of the National Bank of Kazakhstan Grigory Marchenko in the top five rankings.

The third “outsider” group includes those officers, whose ratings are less than 3 points. Group includes all three women ministers of Kazakhstan’s government: Minister of Health,  Kairbekova – on the 40th line, Minister for Economic Integration Aitzhanova – on the 41st, and Minister of Labour and Social Welfare,  Abdykalikova – on the 44th line. It is interesting to note that the Minister of Agriculture Asylzhan Mamytbekov managed to break into this company on the 43rd line.

“We should also mention Asylzhan Mamytbekov, who has been leading the Ministry of Agriculture for one year, and, according to expert estimates, he is clearly unable to cope with its tasks. As a result of the ranking the Ministry of Agriculture is the most inefficient manager (2.14 points) and one of the most unpromising of politicians (1.95 points), “- said the “Strategy. “

Summing up the results of the “Strategy” research, there is little effective managers to be at the helm. According to experts, If outsiders are at the helm of the country, there is no need to be surprise of failures in public policy.

Agricultural News of Kazakhstan
East Kazakhstan: The rains have shifted the schedule of haying and harvest
0 1