New border entry point to be opened at Kazakh-Turkmen border 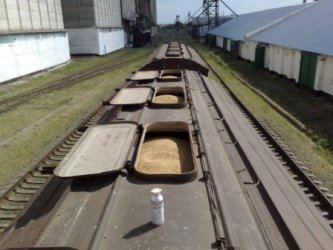 The agreement was signed by Minister of Transport and Communication of Kazakhstan Askar Zhumagaliyev and Minister of Railway Transport of Turkmenistan Bayram Annameredov. The agreement provides for opening of a new international railway border entry point Bolashak (Kazakhstan) – Serkhetyaka (Turkmenistan) on the Kazakh-Turkmen state border.

Signing of the agreement is one of the stages of implementation of the international project on modernization of international transport corridor “North – South”. Kazakhstan, Turkmenistan and Iran implement a project on construction of Uzen (Kazakhstan) – Bereket (Turkmenistan) – Gorgan (Iran) railway within this project.

As the press service of the Ministry of Information and Communication of Kazakhstan reports, the construction of 146 km of railways and facilities ensuring safety of operation were built at the end of the last year.

As earlier reported, the implementation of the project on modernization of “North-South” international transport corridor was started in 2007 when the Presidents of Kazakhstan, Turkmenistan and Iran signed the Joint Declaration on implementation of the project on construction of Uzen (Kazakhstan) – Bereket (Turkmenistan) – Gorgan (Iran) railway at the Summit of Presidents of Caspian States.