Pakistan:15m bags on Rs 3.5b subsidy to be sold in Ramazan 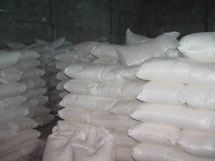 Lahore-The Ramazan package 2010, seems to be a better though-out effort of the provincial government if compared with last year’s disastrous subsidised flour scheme that created distortions in the market,  reported “Kazakh-Zerno” IA with reference to the “International News“.

A highly subsidised wheat flour bag last year jolted the whole market and despite release of a huge quantity at special bazaars and trucking points, people failed to get flour smoothly. The provincial government had to face embarrassment as its administrative measures also proved ineffective in this regard.

This year’s decision to reduce the price of flour to a reasonable level may work well, said market insiders. As per the decision taken on Saturday, a 20kg flour bag will be sold at Rs 425 in the market, involving subsidy of Rs 100 each bag. The provincial government will also set up a Ramazan bazaar where a flour bag of 20kg will be sold at a special price of Rs 400, official sources told The News here Saturday.

In total, 15 million bags will be sold during Ramzan at subsidized rates. The provincial government will give subsidy of Rs 3.5 billion on them.As per the plan, wheat will be released to flour mills on a subsidised rate of around Rs 760 per 40 kg roughly a week ahead of Ramazan. Earlier, sources said the provincial Food Department had devised a plan to given cash subsidy to flour mills for the supply of cheap flour to the market which could malfunction due to a variety of reasons. Keeping in view resistance of the flour milling industry, the provincial government decided to release wheat to flour mills at a low rate instead of giving cash subsidy. As per the plan, the supply of subsidised flour will start a couple of days before the commencement of Ramazan. Last year, the Punjab government provided a 20kg flour bag at a highly subsidised rate of Rs 200 under the Ramazan package, which required subsidy of around Rs 8 billion. Initially, 472,500 flour bags were provided daily in the province. However, keeping in view rising demand and pilferage of cheap flour, provincial government increased the daily supply of flour bags to about 8.5 lakh in Ramazan bazaars and trucking points throughout the province.

The flawed policy of the government led to distortion in the market, resulting in overdemand of flour. Despite administrative measures, the government could not maintain its smooth supply in the market last year. Eventually, the provincial government had to impose an inter-provincial ban on transportation of flour. Despite about a million bags supply a day, long queues of people had been witnessed at special bazaars and trucking points. Even elderly people had lost their lives in a bid to get subsidised flour bags. In fact, the supply of flour bag at unprecedented rates attracted buyers and people living in urban as well as rural areas.So much so, people used this cheap flour to feed their cattle.

The high rate of subsidy led to vanishing of flour from the market despite the government’s effort to enhance its supply substantially. Inconsistent prices of flour in provinces caused a hue and cry and encouraged transportation of cheap flour from Punjab to other provinces. Meanwhile, market insiders claimed that the daily flour supply of 500,000 bags this year during Ramazan was not enough and it should be increased. However, they agreed that due to comparatively less subsidy this year, demand of flour would not be that high.

Pakistan Flour Mills Association leader Dr Bilal Sufi has welcomed the Ramazan package, saying it would help the provision of cheap flour to the masses. He added uniform subsidy during Ramazan was a good step of the government.

Agricultural News of Kazakhstan
Kazakhstan: Karaganda citizens will be offered potatoes at 30 tenge
0

Agricultural News of Kazakhstan
Kazakhstan: Almaty farmers prepare seeds for the next planting
0

Agricultural News of Kazakhstan
Kazakhstan: Minister of Agriculture is the most inefficient state manager
0
You may also like