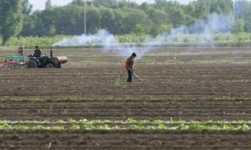 “We’re here to shine a spotlight on the plight of the Black farmer,” Robert Binion, a farmer from Clanton, Alabama, told a group of Black farmers and supporters outside the U.S. Department of Agriculture (USDA) this morning. “There have been two changes in the administration in Washington since the Black farmers’ lawsuit was first filed. We don’t just want words. We need action now!”
On February 18 the USDA and Justice Department announced a $1.25 billion settlement to resolve long-standing claims of discrimination by the USDA in loans to Black farmers. Earlier this year the U.S. House of Representatives voted to allocate compensation for the farmers. But the Senate refused July 22 to pass the measure. It also rejected $3.4 billion to Native Americans for royalties denied them by the U.S. government.
The Senate denial of redress is the latest turn in the fight by Black farmers to correct injustices coming out of the 1999 settlement of the historic Pigford v. Glickman class-action lawsuit. The 1999 settlement ordered the government to give claimants $50,000 each, debt forgiveness, and preferential treatment in future loan applications.
Forty-one percent of the claims by farmers were denied. Many did not even learn of the settlement until after the deadline for filing had passed.
“I faced threats for supporting [President Barack] Obama in the 2008 election,” Binion said. “Now I want him to support me. We are tired of making this trip to Washington. We want to go into 2011 with a clean slate!”
Binion promised further protests by farmers if Congress doesn’t act swiftly to approve funds.
Also speaking were Lawrence Lucas, president of the USDA Coalition of Minority Employees, and Glova Scott, Socialist Workers Party candidate for the U.S. House of Representatives from the District of Columbia. In addition to farmers from Alabama, Texas, and Oklahoma, the protest drew several Black workers from the Washington area whose families have farms in the South.

World Agricultural News
USDA: SD crops progressing well thanks to weather
0 1
You may also like