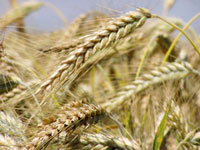 “The hail hit here before we arrived,” said Jan Altendorf, president of Altendorf Harvesting, based in Minto, N.D. “Some fields had a 60-bushel crop and some were totaled out from the hail.”

Corn fields were more damaged by hail in Nebraska than the wheat fields, she noted.

Since they’ve been in Nebraska, there have been a few rain showers, but nothing that has slowed them down.

All the wheat crops have been “beautiful” for the producers in all the states, with 40 to 70-bushel crops not unusual, according to Altendorf.

“Some farmers are saying it is the nicest crop they’ve ever had. Everyone is pretty happy,” she said, adding, however, that protein is low throughout the states, often as low as 9 percent.

Crews have also just finished cutting in Colorado. Near Limon in east central Colorado, there was some “terrible” hail that totaled a lot of acres but near Denver, the “crops looked really good,” she said.

Some of the Altendorf combines have been in the Pierre, S.D., region since July 10 waiting for the wheat to turn. Most of the wheat is winter wheat, but there is a small amount of spring wheat.

Near Mitchell, S.D., crews have been able to cut a nice 40-bushel per acre crop.

But a later than usual harvest is the story for most of the remainder of the trip north, Altendorf said.

In North Dakota, the northeastern region of the state will be ready for harvest sooner than the western regions, she said. Some of the machines have been sent to the Altendorf home farm base in Grafton, N.D., where crops will be ready to cut around Aug. 10.

They also do a lot of cutting around Mott, N.D., in the southwestern region of the state, and harvest there looks like it will be a week later than Grafton.

“It is usually the other way around,” she said. “It has been a strange year.”

But, of course, weather could change everything. For now, they are hearing of a lot of green wheat in the north.

In Montana, Altendorf doesn’t expect to begin cutting until mid-August which is very unusual.

“I’ll fly in and spend a week around Great Falls, Mont., with the crews,” she said.

They also send crews and machines to the river area on the Washington-Oregon border for the irrigated crop harvest. Harvest there is also running a little late, and Altendorf will check on it in a week to see when they might need machines.

“It’s going to be a challenge for all of the custom harvesters over the next three weeks,” she said. The companies are all waiting with their machines for the crops to turn, and the crops might all turn at once from here on out.

“While we wait, we might have to spend a little time touring around the countryside for a day,” she said.

Agricultural News of Kazakhstan
Kazakhstan: In the Pavlodar region funds are allocated for purchase of 6.5 thousand heads of sheep
From the regional budget in the framework of the program “
0 2

Agricultural News of Kazakhstan
In the bins of North Kazakhstan there is more than 3.5 million tons of grain harvest-2013
With 70.5% of areas with threshed grain crops in the
0 2
You may also like